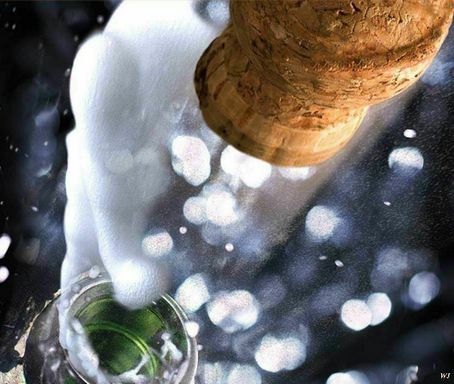 To truly understand champagne yeast and its ability to aid in the production of tasty beverages, we must also understand the fermentation of Champagne.

Yeast (or Saccharomyces cerevisiae) is a single-celled fungus that is capable of converting sugar into alcohol and carbon dioxide. There are two main forms of yeast – baker’s yeast and brewing yeast.

Baker’s yeast converts the food sugars present in dough into the gas and can be found at the grocery store. While brewing yeast is either dry or liquid and should not be ingested raw.

Brewing yeast is responsible for turning wort into the desired alcoholic beverage. Wort is the liquid left over after the grapes mashing process during brewing. The liquid, or wort, contains the sugars to which the yeast reacts.

There are many varieties of brewing yeast to complement the beverage of choice. Wine yeast is used in a variety of wines and ciders because it converts the fruit juices into carbon dioxide and alcohol.

Champagne yeast is best suited for champagne, dry wines, cider and fruit juices and is a clean, neutral yeast.

Champagne is brewed by using the “Traditional method” also know as “Méthode Champenoise“.

The champagne is bottled after the first fermentation. Then, a second fermentation is forced by adding champagne yeast and rock sugar.

Aging and the amount of sugar added after the second fermentation decides how sweet the Champagne will become.

The yeast fermentation temperature varies for each beverage that is brewed.

This Champagne yeast, also known as Prise de Mousse, is ideal for barrel fermentation because it is low foaming and strong acting.

The yeasty aroma is better suited for secondary fermentation in sparkling wine and in production.

The flocculation is low, the temperature for yeast fermentation ranges in 45-95 degrees Fahrenheit (7-35 degrees Celsius), and the alcohol sits at 18 percent.

The second most common yeast strain used, Pasteur Champagne is common in sparkling wines because it ferments quickly and effectively in colder temperatures.

It is also tolerant of medium-to-high alcohol conditions, which are common in wine production.

A champagne yeast isolated in Champagne region of France is preferred in bottle fermenting because of its tolerance to colder temperatures due to its slow fermentation.

In brewing with Champagne yeast, there are many variables to take into consideration.

One of these variables is flocculation, which is used to see how quickly the yeast clumps together and settles to the bottom of the fermentation container.

Attenuation refers to the percentage of malt sugar the yeast converts to carbon dioxide and ethanol. Yeast strains, on average, attenuate 65-80 percent.